For the third year in a row, the Masters Walleye Circuit (MWC) landed in Ortonville, MN on April 28th-30th, 2016. The week prior to the event, the weather was rough and the fishing was tough. After speaking with several anglers Thursday night before day one, not many fish were expected to cross the stage. One angler even thought there would be less than 5 limits out of 60 boats brought in over two days. It turns out he was right when only two teams recorded a limit of 10 fish.

Following the day 1 weigh-in, all 52 future anglers gathered to the North West side of the stage where they learned the importance of Aquatic Nuisance Species (ANS) and how to keep our waterways safe and clear from these dangers. They also learned on the water safety, fish identification and how to properly use the “buddy” system. Following the educational lesson, each future angler lined up to collect their own rod/reel combination courtesy of the National Professional Anglers Association’s (NPAA) Future Angler’s Foundation (FAF). .

This was the third FAF event held in Ortonville, MN in as many years. Over 100 kids have attended each walking away with a rod/reel combination and new knowledge about the sport of fishing.

NPAA Members who helped with the clinic include: Spencer Deutz #552 and Zach Axtman #512. MWC Anglers who also helped were Ron Deutz and Steve Axtman. 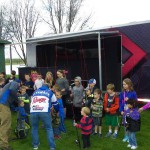