April 21st-22nd, 2017 marked the fourth time the Cabelas Masters Walleye Circuit (MWC) held a regular season event on Big Stone Lake with Ortonville, MN being the host city. Big Stone Lake is a Minnesota/South Dakota boarder water stretching 26 miles from end to end. Fishing can be fabulous on Big Stone however with a 12 degree drop in water temperature just two days prior to the first day of the event; fishing was as tough as the weather.

Many future anglers sat in the crowed in anticipation of seeing hundreds of walleyes brought on the stage.  With the possibility of 305 walleyes, only 43 were brought to the scales however there was something else the future anglers had on their minds; the future angler kids and family fishing clinic that was scheduled to take place following the weigh-in.

At 3:45pm on April 21st, 2017, 20 future anglers gathered around a picnic table on the North end of the MWC stage at Lakeside Park. Here they learned the importance of keeping their waterways clean of aquatic nuisance species (ANS), on the water safety, fish identification, proper equipment, why fishing is fun and much more. They also each received their own rod/reel combination courtesy for the National Professional Anglers Association’s (NPAA) Future Angler Foundation. In all, 20 future anglers and 15 adults attended the clinic. 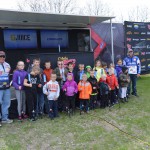